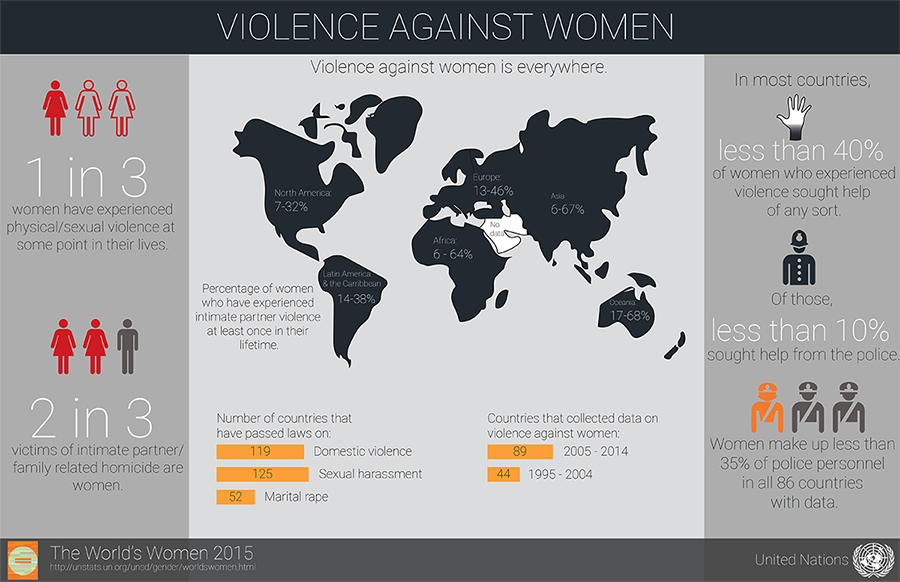 If you saw your father hit your mother, how would you feel? Or if you knew that your sister or daughter was being abused by her partner or spouse, what would you do? How about a relative, friend or neighbour? Would you sit back and think it was acceptable due to the fact that it was taking place within the confines of marriage or a relationship and therefore just a ‘domestic dispute’? I imagine not. It is a topic that is upsetting and unpleasant but one that needs to be addressed. To illustrate the magnitude of the issue, according to a global estimate published by WHO, about one in three (35 percent) women worldwide have experienced either “physical and/or sexual intimate partner violence or non-partner sexual violence in their lifetime”.

That statistic is shocking, but even more so when you consider that domestic abuse is also a crime that is widely underreported as it so frequently takes place behind closed doors. Many victims shy away from going to the authorities for fear of the repercussions of their actions or of not being taken seriously by the authorities. Many are dependent both financially and emotionally upon their partners and feel they have no choice but to keep quiet about the abuse. It may also be a matter of shame, guilt or embarrassment for a victim to admit to a situation which they would prefer to try and hide from their family or friends. On the flipside, many families would rather turn a blind eye to the abuse for fear of the social implications. Maintaining the status quo outweighs the welfare of the victim. There are also cases of abuse that do not get reported purely because the victim is under the impression that physical violence is normal and therefore acceptable. They do not recognise it as abuse. For example, in Mauritania, for some women of Soninké descent, divorce is frowned upon and physical violence within a marriage is ingrained as an act of love by their spouses.

The United Nations defines violence against women as “any act of gender-based violence that results in, or is likely to result in, physical, sexual or mental harm or suffering to

women, including threats of such acts, coercion or arbitrary deprivation of liberty, whether occurring in public or in private life”. Though victims of domestic abuse are predominantly women, it can affect men as well. According to the NHS, “One woman in four (and one man in six) in the UK will be a victim of domestic violence during their lifetime”.

The most common forms of physical abuse range from slapping, beating, kicking through to burning, choking or threatening the victim with an object or weapon and can result in broken bones, internal injuries and in some cases, death. In England and Wales alone, on average two women are killed by their partner or ex-partners every week and domestic abuse-related crime is eight percent of total crime (Women’s Aid). The Violence Against Women Survey carried out in 2015 by the Bangladesh Bureau of Statistics (BBS) stated that 80.2 percent of women are victims of spousal abuse.

Psychological abuse is far more insidious and includes behaviour that tends to intimidate and persecute. Quite frequently, abusers use verbal aggression, humiliation or threats of abandonment and physical violence to maintain control over their partners by instilling a feeling of low self-worth. Many women find themselves isolated and confined to the home and unable to break free from the vicious cycle of abuse. Economic abuse is also a way to exert control and dominance over someone. It can include the refusal to contribute financially or provide funds to the victim making them fully dependent on their abuser. This can extend to the denial of food and basic needs.

So it is with growing concern and dismay that we find countries such as Russia, rather than protecting those who are vulnerable, taking a step backwards and on the verge of passing a legal amendment that would decriminalise domestic abuse. The controversial bill will reduce the penalty for a first-time offence against family members including spouses and children as long as it does not cause serious bodily harm or require hospitalisation. The offender or abuser will only be charged a woefully inadequate fine of up to 30,000 rubles (£400), administrative arrest of up to fifteen days or compulsory community service. Previously, the same crime would have been considered a case of battery and been punishable by up to two years of jail time. Yulia Gorbunova of the Human Rights Watch says, “The domestic violence bill would reduce penalties for abusers and put victims’ lives at even greater risk.” To make matters worse, it seems to me that this bill would normalise violence within the home instead of deterring and criminalising the offender.

Last year, the chairman of the Council of Islamic Ideology in Pakistan, Muhammad Khan Sherani, put forward a proposal to try and make it legal for husbands to “lightly beat” their wives. He suggested that “A husband should be allowed to lightly beat his wife if she defies his commands and refuses to dress up as per his desires; turns down demand of intercourse without any religious excuse or does not take bath after intercourse or menstrual periods.” He also claimed that it was “un-Islamic” for women to leave an abusive relationship and seek refuge in a shelter. Despite the proposal being both ridiculed and condemned it exemplifies the concept that women are considered the property of a man and as such accountable to and punishable by them.

Factors such as low education, low income, previous exposure to violence in the family and living in a patriarchal society where gender inequality is perpetuated, all contribute to an increased incidence of domestic violence. However, it is a crime that occurs worldwide irrespective of race, religion and socioeconomic status. It just takes place in varying degrees. Women are vulnerable to different forms of abuse simply because they are women. In a world where women constantly battle misogyny, sexism and gender inequality in the home environment and the workplace, domestic abuse will continue to be an issue unless we can change the attitudes of people through education and social and legal reform.

Nadia Kabir Barb has been a long standing columnist for the Star Magazine (The Daily Star Newspaper, Bangladesh) with her column ‘Straight Talk’. She graduated with a Masters from the London School of Economics and the London School of Hygiene and Tropical Medicine and has worked in the health and development sector in London and Bangladesh. She is a British Bangladeshi mother of three and draws inspiration for her column from her multicultural background. Her articles range from social and political issues to humorous and often irreverent observations of life in general. Her short stories ‘Let Me Go’ and ‘The Lives of Others’ were selected as Story of the Week by The Missing Slate Magazine and her work has appeared in various literary magazines around the world.

This article first appeared on The Daily Star at http://www.thedailystar.net/op-ed/the-violence-within-1370890.